Stories > Flo and Jur were particularly attracted by the pleasant work environment.
Previous
Next
Stories

Flo and Jur were particularly attracted by the pleasant work environment.

A conversation with the new generation of digital engineers at Infranea.

Flo and Jur laugh during our meeting, at their head office in the modern Bond Park in Breda, when we tell them that three-letter names are fashionable at Infranea. Indeed, when you add Kim, Max and Lut, it does appear to be quite a trend at Infranea. Naturally, it’s not the length of your name that’s important, but the pleasant work environment, the right attitude and the challenging projects. That was the conclusion reached during our enthusiastic discussion with these two young digital engineers.

How long have you been working at Infranea?

Flo had only been at Infranea for 7 weeks when we began asking her about her experiences, but she clearly already feels quite at home among more experienced digital engineers. Jur was recently recruited by Infranea as well, but has worked here since the beginning of 2017, as an apprentice and then as a working student. Therefore, he has more to say about his experiences.

How were your first weeks at Infranea?

Flo immediately starts by saying that she was given a great welcome. Although she did wonder whether it was the best time to start, she laughs. It was the week after carnival and it was really quiet in the office. She gives no indication of whether the quiet was due to the holidays or to crazy carnival celebrations at Infranea. Jur began as a student in 2017. He was therefore immediately immersed in the world of digital engineering. “At the end of the summer holidays, there was a student battle for BIM,” explains Jur. With Infranea’s help, he completed a BIM showcase in 36 hours, which he won, and his prize took him to the Autodesk University in Las Vegas. Talk about a great start…

How did you end up at Infranea?

Flo came to Infranea via an employment agency. It was one of her first interviews and she was invited to meet Infranea the very next week. “There was a click right from the start,” says Flo. That was actually a key reason for her to sign up with Infranea. Jur literally rolled into the job. Jur studied Civil Engineering at the Amsterdam University of Applied Sciences (HvA). He ended up at Infranea thanks to a tutor. He was looking for an apprenticeship where he could experience BIM and peripheral matters in practice. 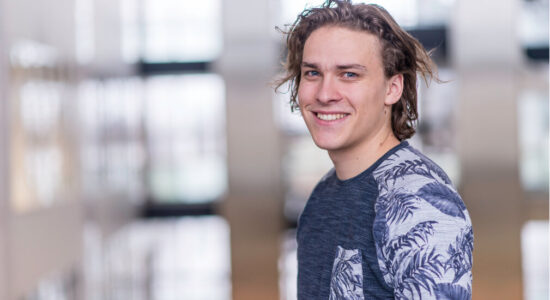 How have your studies helped you in your job?

Jur had his first interview with BIM Coordinator Michel from Infranea, who made some time for a meeting in a restaurant on the way home from a project. It was meant to last half an hour, but in fact they kept talking for almost 2 hours. Jur felt like he was in the right place right away. The interview led to a 6-month apprenticeship at Infranea. Afterwards, as a working student, he stayed in touch with Infraneato develop his business case.

Why did you choose Infranea?

Flo and Jur were obviously both keen to work for a smaller company with a pleasant work environment. What’s more, they both agree that the good atmosphere was the most important reason to choose Infranea. Talking to managers Jaap, Johan and Lut, and other colleagues, it is immediately clear that there is a genuine passion for digital engineering. It appears that the good atmosphere extends to the personal contact. There is no sense of hierarchy as in some large companies. You can easily talk to anyone in the organisation, confirm Flo and Jur.

What are the main benefits of working at Infranea?

According to Jur, innovation at Infranea tends to be put into practice right away. As an example, he mentions the Groene Boog project. He is working with Michel to implement the prototype in his final graduate research: a Virtual Reality Driving simulator that can be used as validation. “You learn to use lots of new tools and methods here. There are also specific work groups and team days every fortnight.” For Jur, Infranea is a typical example of a self-learning organisation. 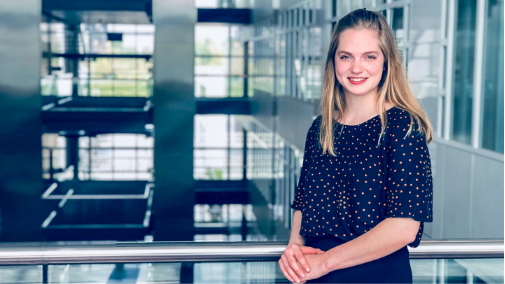 Flo adds that, as market leader, Infranea must continue to lead the way. This means that a constant focus on innovation is essential. You cannot afford to stand still, you need to keep learning and applying new things. I had a limited knowledge at the beginning, but have been able to make great progress thanks to the integral projects in digital engineering.

What is your dream project?

For Jur it is the prestigious E39 road along the west coast of Norway. This is one of the greatest road-infrastructure projects in the world and includes 6 unique engineering structures. One of these is by far the largest span in the world, explains Jur with enthusiasm. Flo’s passion is hydraulic engineering. She dreams of being involved in solutions for dams in the Netherlands. The new Delta works will become a gigantic infrastructure project in the next 10 to 20 years.

Do you have any tips for newcomers?

“Above all, follow your own heart and feeling,” says Jur. “It is important at Infranea that you make suggestions and take the initiative. You are given the opportunity to manage your own work. Seize that opportunity!” Flo agrees and recommends talking to everyone at Infranea. “That way, you can learn from each other and share ideas, and that naturally boosts the atmosphere as well!”

A chat with BIM coordinator Anass Fizazi.
What makes a team of digital engineers so unique at Infranea? 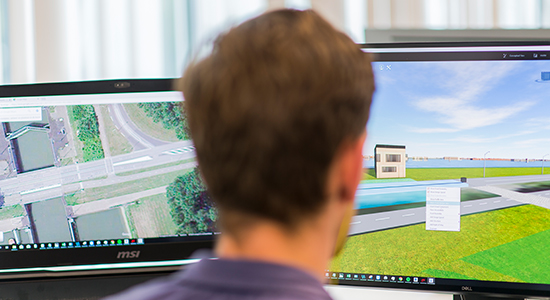 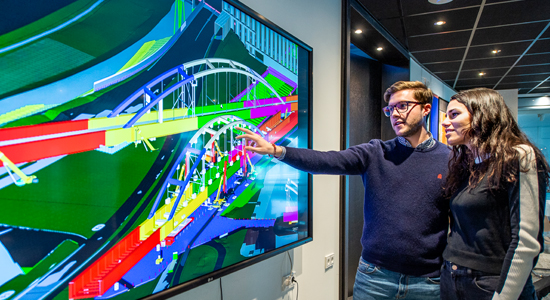 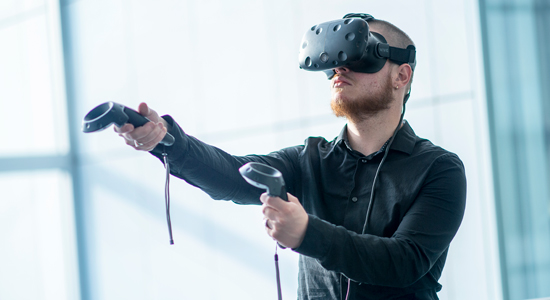